On 13 November 2020, the Two Oceans Aquarium will celebrate its 25th birthday.  The Aquarium opened its doors in 1995 and has since welcomed more than 10 million visitors of which 6 million have been local, establishing it as a firm favourite with local and international travellers. It is a well-respected organisation within the international aquarium and tourism industries and a leading conservation and education facility.

“It is incredible to think that the Two Oceans Aquarium is a quarter of a century old. It has grown into a much-loved and well-respected facility with conservation, education and research at its heart. We have many achievements to celebrate and these achievements have been made possible by our visitors, our members who have chosen to become part of the Aquarium family, our partners who have assisted us in growing the Aquarium’s reputation locally and internationally, and our staff and volunteers who have dedicated themselves to saving the ocean. Thank you for all your support over the years and we look forward to even greater achievements in the next 25 years,” said Michael Farquhar, CEO of the Two Oceans Aquarium.

The Two Oceans Aquarium’s vision of “abundant and healthy oceans”, and its mission “to inspire action for the future well-being of our oceans” along with a strong education and conservation focus, drive this organisation. In 2018 the Aquarium established the Two Oceans Aquarium Education Foundation (NPO/PBO) to further facilitate and grow its education, conservation and research efforts. This work incorporates the already well-established and respected marine science education programmes, the turtle rehabilitation programme, and the Marine Wildlife Management Programme. 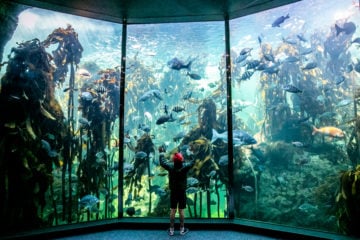 As a for-profit organisation, and receiving no funding from government, the Two Oceans Aquarium relies on income generated through footfall and other income streams such as functions and conferences. Strategic partnerships such as those with the Save Our Seas Foundation, Skretting and I&J (a founding partner) enable the Aquarium to further its mission of inspiring people to take action and protect and conserve the ocean and the marine environment. The Aquarium primarily houses animals and plants found in the waters off the southern African coast and focuses on highlighting this rich diversity of life, some of which is found nowhere else in the world. It also exposes some of the negative human impacts on the ocean, such as plastic pollution and overfishing, and strives to educate about ways to mitigate these impacts.

The Two Oceans Aquarium enjoys great support from the broader international aquarium community. In 2012, this support and trust manifested in the Aquarium hosting the 8th International Aquarium Conference. It was the first time that this conference had been hosted on African soil, and it was the first time that the conference had been hosted in the Southern Hemisphere.

Given its close association with its peers in North America, Europe and Asia who also consider education about, and protection of the ocean to be a public aquarium’s core purpose, the Two Oceans Aquarium is consistently chosen by international tourists as an attraction worth visiting. Over the years an average of around 45% of the Aquarium’s visitors have been from outside of South Africa. This number has decreased dramatically as a result of the current Covid-19 pandemic, but the Aquarium looks forward to welcoming international visitors back soon. With local visitors making up about 55% of its annual footfall, the Aquarium is most certainly also looking forward to welcoming back all its Capetonian and South African visitors and cannot wait for them to again experience the majestic underwater world that the Aquarium has to offer. 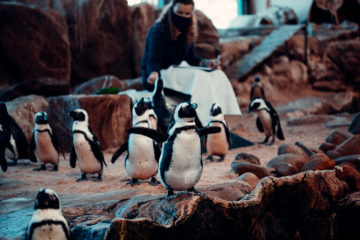 The Two Oceans Aquarium is proud of its sustainability journey thus far, having joined the Heritage Environmental Rating Programme in 2007. The Aquarium is currently a Diamond member which is the highest ranking in the rating programme. In 2019, the Aquarium won the Gold Award for “Best Responsible Attraction” at the African Responsible Tourism Awards at WTM, and also walked away with a Silver Award in the “Best for Global Goals Reporting” category.

“The Aquarium is many different things to many different people, which makes marketing and operations both a supreme joy and a challenge,” says Ingrid. “On the one hand, we are a familiar, loved and trusted space for local families – as exhibited by our large annual membership base. On the other hand, we are seen as a world-class tourist attraction known for its values and educational messaging. In between, we are a place where you can scuba dive, receive a classroom lesson, see a puppet show, watch live music or attend a corporate function. Above all, our goal is that every single person who visits the Aquarium, leaves with more love and respect for our life-giving ocean,” said Ingrid Sinclair, Marketing Manager of the Two Oceans Aquarium.

The Aquarium is not only a place where visitors can spend time exploring the underwater world, but it also offers conferencing and function facilities with the most amazing and breath-taking backdrops. One can host a conference with the tranquil Kelp Forest Exhibit as the backdrop or a dinner or cocktail party in front of either the I&J Ocean Exhibit or the Save Our Seas Foundation Shark Exhibit with large sharks and other fish as ever-changing “guests” at your event. Adventure seekers can also dive in all of the Aquarium’s large exhibits and guided tours for tour groups can be arranged through the Aquarium’s dedicated tourism department.

Looking forward, there is always room to grow and to be innovative in finding ways to communicate the Aquarium’s messages of education, conservation and research. Whether it is through its exhibits, the Aquarium Foundation, public talks or its highly informative website and social media networks, the Aquarium in Cape Town will continue to strengthen its footing within South Africa as well as the international aquarium and tourism communities. Happy birthday to this amazing underwater landmark and icon!