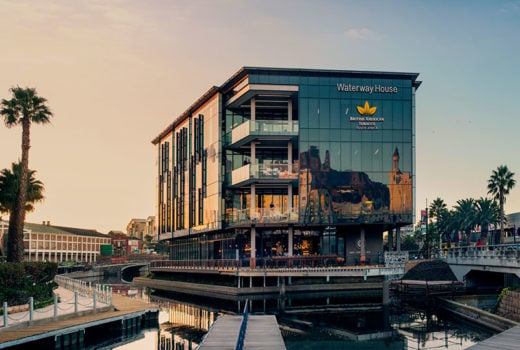 What is the Canal District?

What is its history?

The area now known as the Canal District was of strategic importance until the Amsterdam Battery was disbanded in 1898. After World War II, extensive land reclamation from the sea to build a deep water harbour shifted the Table Bay coastline a significant distance away, and the area subsequently fell into disuse. At the time that the V&A Waterfront commenced development in the area it was being used as a car park and occasionally used for events.

How do I get there?

The District provides the first point of contact for visitors entering the V&A Waterfront from the city, creating a seamless link to Dock Road in the Waterfront from the CBD via Buitengracht Street or Alfred Street, and from the Prestwich area via Ebenezer Road.

What will I find there?

The area consists of commercial and retail space at Waterway House, a new parking facility, the City Lodge Hotel, a film studio and an urban park developed around the remnants of the historical Amsterdam Battery. A residential development is also planned for the area. In 2014, the V&A Waterfront acquired the old Queen’s Hotel and Amway buildings and these will be redeveloped as part of the Canal District.

What does it consist of?

The Canal reflects the original coastline that ran through the district and provides a clear symbol of the district’s coastal location. The Canal at the heart of the Canal District links the V&A Waterfront and the Cape Town Convention Centre (CTICC), with water taxis providing an easy transport option between both points. It also reintroduces the old connection between the city, its waterways and the sea along pedestrian landscaped walkways and bridges. The canal also introduces a leisure element with kayaking and stand-up paddling events.

The 18 000m2 Waterway House building is the largest in the Canal District. As is the case with other areas of the V&A Waterfront, development at the Canal District was demand driven and the area is home to a number of prestigious corporates and retailers. The commercial hub of the Canal District is Waterway House, an office block divided into two distinct wings connected by a walkway in the centre. The south wing of the Prime Grade office space houses the head office of multinational company British American Tobacco, while the north wing is occupied by Ernst & Young and Stonehage Fleming.

Parking challenges have been addressed with a four-level parking garage that forms part of the District, and will add an additional 1 250 new parking bays to the area. Parking can be access via the Alfred Road entrance and a well the Dock Road Junction entrance. When the parking garage is complete, the P4 level will be reserved for designated tenants. The parking at Waterway House is similarly reserved exclusively for tenants.

The Canal District and its Battery Park are accessible to all visitors, of all ages, including wheelchair access from within the parking areas and the pedestrian walkway along the Canal.

Waterway House has been designed according to best practice green design principles, and achieves a minimum five-star Green Rating. Standout environmental features include: The facades have been specially designed to reduce the amount of heat ingress by shading the windows with a saw tooth façade design that incorporates performance double glazing. The offices also allow an abundant flow of fresh air to keep the building cool in hot summer months, while offices have been designed to make the most of natural daylight to save on energy bills and to maximise the wraparound scenic views. The built-in acoustic control reduces noise levels. Environmental features include solar roof panels, rainwater harvesting across the site in a special 210me storage facility, and low-flow fittings that greatly reduce consumption of potable water.

The newly developed park preserves the remnants of the old Amsterdam Battery, with the remaining fragment of the Battery retained along with the addition of an interpretation area for the public to illustrate its original scale and form. The park contains pedestrian walkways along the Canal, a piazza with paved walkways, benches, a grassed area and indigenous gardens to relax in – a landscaped public amenity for citizens of the city to enjoy. Other elements include grassed and landscaped areas for recreational activities and a pavilion for hosting events and eateries and coffee shops. Read More

The Waterfront Theatre School has occupied a grand historic building on Alfred Street for over two decades and will continue to bring life and activity into the newly configured district.

The V&A Waterfront has made a considerable investment in developing the area to its full potential, while protecting its heritage. This entails: