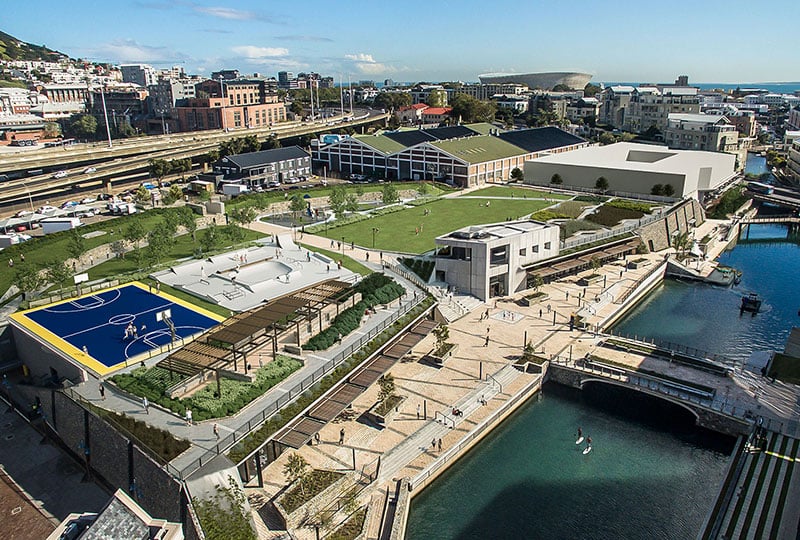 Battery Park is a new urban park that forms the gateway to the V&A Waterfront. When it is completed in October 2018, it will integrate Cape Town’s CBD and the V&A Waterfront through a series of pedestrian routes, including one alongside the canal. Visitors to the park will also be able to engage in a range of outdoor recreation, entertainment and retail activities in various levels of public spaces.

The 12,000 m2 (approx. 1.2 hectare) park forms part of the V&A Waterfront’s Canal District and can be accessed from either Dock Road, Fort Road, Ebenezer Road or Alfred Street. A four-story public parking facility is constructed beneath the park with entrances via Alfred Street or Dock Road. When it is complete the parking facility will offer 1206 bays for public, residential and tenant use.

The V&A Waterfront will be responsible for all security, cleaning and maintenance of the park.

Each area of the park contains public walking paths and benches. Landscaping consists of waterwise fynbos and other indigenous plants and trees. A combination of rainwater harvesting and greywater is used to maintain the plants.

The site is of archaelogical importance as it still contains the rear ramparts of the historical Amsterdam Battery, one of the oldest structures in Cape Town. Archaelogical digs of the area were undertaken prior to construction of the park, and they uncovered the two circular walls which have been retained.

To accentuate the look and feel of the old Battery, stone-filled gabian walls have been used throughout the park.

Battery Park will host a range of water sport activities from standup paddling to kayaking and swimming. The canal also provides a link between the V&A Waterfront and the Cape Town International Convention Centre through water taxis that ferry passengers between both points.

The Piazza forms one of the levels of the park. It comprises of retail outlets, pedestrian paths, benches, gardens. Stairs leading down from the Piazza give visitors access to the canal, from where they can watch water activities or simply meander along the water’s edge.

The elevated park area offers views across the V&A Waterfront and the surrounding city streets. The park is fully accessible to disabled visitors. This family friendly area consists of a jungle gym, swings, rocking horses and a scooter path.

The Piazza is home to niche companies offering specialist services as well as food and beverage retailers.

V&A Waterfront’s vision for the park

David Green, V&A Waterfront CEO said: “A key objective of the V&A Waterfront has always been to re-establish the connection between the city and the sea, which we have achieved with the pedestrian path that runs alongside the Canal. Equally important, the ruins of the historic Amsterdam Battery have been retained in the Park as a new heritage site. A key focus of the development was also to offer views of the Waterfront and surrounding CBD, as well as retain and enhance the historically important line of sight between the Battery and the Noon Day gun site on Signal Hill. Our overarching vision though, was to provide a functional, convenient, comfortable, safe and unrestricted space with recreational activities for all age groups.” 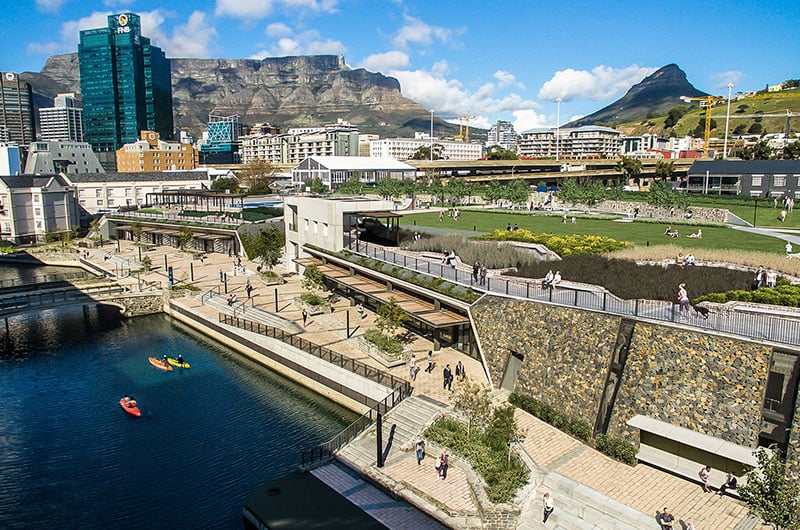