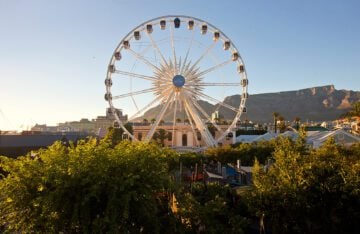 The much loved and iconic Cape Wheel is moving by the end of this month from its current location in front of the Victoria Wharf Shopping Center to a new location offering unparalleled views to Robben Island and beyond, as well as views of passing ships movement to and from the Waterfront and the commercial port while retaining views of the city bowl and Table Mountain. The wheel, which came into operation in 2008, is due to undergo maintenance and will stop operating Sunday the 19th of June. The wheel will be dismantled mid-June and will be reassembled at the new site, close to the Waterfront’s boardwalk with additional new activities like Skilled Games and Food & Beverage where it will open in time for the start of the Cape Town summer in November.

The new site, with near access to Breakwater park, also provides a more open and relaxed public space for visitors to the wheel.

Work is also underway where the wheel currently stands to revamp this area into a landing plaza for public transport into the waterfront.

About the Cape Wheel 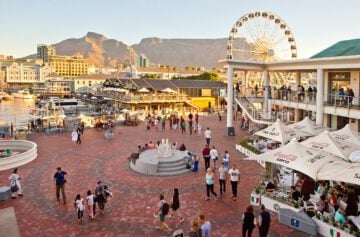 In addition to the 15-minute ride, the wheel offers a variety of unforgettable experiences, including a picnic in the sky night dining experience, a free ride on your birthday special, a senior’s discount on Tuesdays and discounted ticket prices for pre-booked school outings.

The Wheel of Excellence, now also known as the Cape Wheel, was designed by Ronald Bussink, and was constructed in Germany in 2007. The Cape Town Wheel, which stands 50 metres high and takes nearly a week to assemble, has travelled around the world, visiting Belgium twice, Germany twice and Sweden from 2009-2010.

It first visited Cape Town in 2010 where it was initially meant to remain for only a six-month period during the FIFA World Cup. But since then it has found a permanent home at the V&A Waterfront, the oldest working harbour in Cape Town.