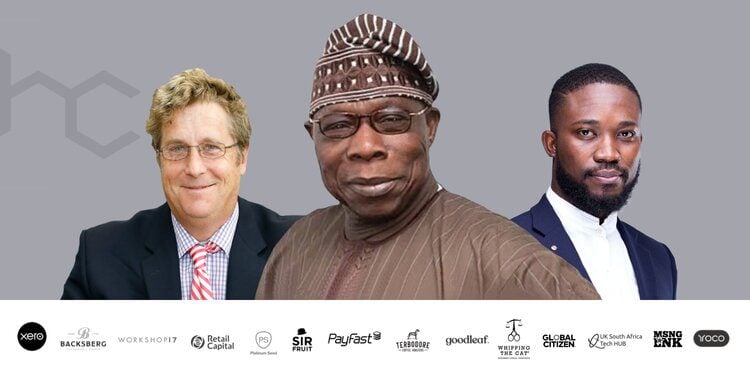 Heavy Chef’s wildly popular evening events are now being livestreamed using the community event platform Crowdcast. During COVID-19 levels of lockdown, entrepreneurs and business owners are requesting relevant presentations that will inspire and empower them for a new, uncertain future.

The world economy has been decimated by COVID-19. Africa’s various economic powerhouses are reeling from the impact of the crisis and the spectre of the first Great Depression in 100 years looms. These are indeed strange and perilous times, but are there solutions to the myriad of challenges we face? Heavy Chef has invited three of the clearest minds to help us find possible paths to a brighter African future.

Greg Mills heads the Johannesburg-based Brenthurst Foundation, which was established in 2005 by the Oppenheimer family to strengthen African economic performance. He has been a visiting fellow at the S. Rajaratnam School of International Studies in Singapore, the Strategic and Defence Studies Centre at Australia National University, Cambridge University’s Centre for African Studies, the Vietnamese Academy for Social Sciences and Shanghai University’s Centre for Global Studies. An Advisory Board member of the London-based Royal United Services Institute, he is the author of the best-selling books Why Africa Is Poor: And What Africans Can Do about It (2010), Africa’s Third Liberation (2012), and, together interalia with Brenthurst’s chairperson Olusegun Obasanjo, Making Africa Work: A Handbook for Economic Success (published in four languages in 2017) and Democracy Works: Rewiring Politics for Africa’s Advantage (2019). The national director of the South African Institute of International Affairs from 1996–2005, he has worked with the United States National Intelligence Council and the British Army’s Development, Concepts and Doctrine Centre on their respective global trends projects, and the commander of the International Security Assistance Force in Afghanistan during four deployments between 2006 and 2012. He has directed reform projects in more than a dozen African countries, including Rwanda, Ghana, Kenya, Malawi, Ethiopia, Somalia and Mozambique. He served as a Danish Africa Commissioner and as a member of the African Development Bank’s High-Level Panel on Fragile States. He was born and schooled in Cape Town, and he holds degrees from the University of Cape Town and Lancaster University.

Olusegun Obasanjo is the former president of Nigeria. He had a distinguished military career, including serving in the 1960 UN Peacekeeping Mission to Congo and receiving the instrument of surrender on behalf the Nigerian government from the opposing forces in the Nigerian Civil War in 1970. Having attended various educational institutions, including Abeokuta Baptist High School, the Indian Army School of Engineering and the Royal College of Defence Studies in London, he rose to the rank of general and became the Nigerian head of state after the assassination of the then military head of state in February 1976. He handed over power to a democratically elected government in October 1979. Jailed for his pro-democracy views for three-and-a-half years until the death of General Sani Abacha in June 1998, on his release he was democratically elected president in 1999 and served two terms. With over 30 books in print covering a variety of topics, he pursues a passion for conflict resolution, mediation and development through a number of institutions, including the Olusegun Obasanjo Presidential Library in Abeokuta, Tana Forum and The Brenthurst Foundation.

Emmanuel Agbeko Gamor has over a decade of experience in youth engagement, digital innovation, entrepreneurship and leadership education. He is a faculty member with the University of Stellenbosch – Executive Education on digital reputation management, runs the podcast Unpacking Africa that interviews and explores multi-stakeholders in multiple industries across the continent. Gamor is the co-Chair of the World Economic Forum Global Shapers Advisory Council on Knowledge and Impact. As an ex-Googler and former YouTube country manager, Gamor continues to explore global digital innovation across the African region. In Accra, he is the erstwhile Director for Digital and Design Innovation at Impact Hub Accra and works on the Ministry of Tourism Arts and Culture Beyond The Return global campaign with the Ghana Tourism Authority. He is a philanthropist, runs a social enterprise Urithi Labs, and volunteers with Rotary Club of Accra-Ring Road Central and the Rotary Club of Johannesburg respectively.

Fred Roed – The MC for the evening is Heavy Chef founder and CEO Fred Roed. Fred is an entrepreneur, investor, writer, presenter, speaker and a father of three. Fred is the winner of the 2015 IAB Bookmarks Award for “Best Individual Contribution to the Digital Industry”. Listed as one of Fast Company’s Top 100 Creative People in Business, Fred is the author of The Heavy Chef Guide To Starting A Business In South Africa.

It’s simple, quick and easy. We’ll send clear instructions with a link the day before the event to remind you. Simply click on the link in the reminder email, enter the password we give you, and ‘woop!’ sit back and enjoy the show.

We use a specialty event software to stream the content, straight to your browser – all you have to do is click. The cool thing about our platform is that you can comment, connect and submit and vote on questions to interact with the speakers and the audience. Or, you can sit back and sip a tasty beverage while you watch the feed.

The Story of Plastic by Two Oceans Aquarium