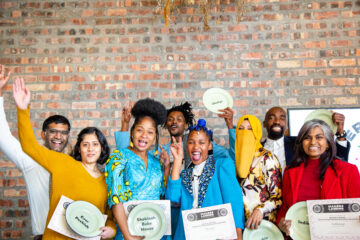 [Cape Town: 24 June 2022] Makers Landing represents a R63-million partnership, with R48-million coming from the V&A Waterfront and a further R15-million from the National Treasury’s Jobs Fund.

Since opening its doors in December 2020, Makers Landing has developed into a thriving food community.

Central to the Makers Landing food philosophy is the Food Lab Incubator programme that mentors small businesses to the next level. The third cohort of six individuals to have entered the five-month mentorship programme graduate today, bringing to 20 the total number of food entrepreneurs to have signed up.

Six small businesses signed up to the programme in February, five of which were female-owned. All six have focused on growing their customer base during their training.

By the time they graduated:

Floyd Dhliwayo from Afro Lunchbox developed a new logo, solidified the concept of his business and launched sales.

Annie Kafuny from Shekina Bake House refined her menu and costing. She included a heritage series of beautiful Congolese desserts, inspired by her roots.

Nabo and Lipato [SURNAMES] from Ukutya hosted two sold-out pop-ups at Makers Landing and were featured by Nandos.

Vinasha and Kurvin [SURNAMES] from Ever Peckish were approached by a cheese company to white label crackers and cheese straws. They are redesigning their napolitaines concept and customer strategy.

Michele Mistry from Indikaap has updated her costings and par levels. She has also launched a retain product range with an extended shelf life, and was a guest speaker at the recent Plant Based Foods show at the Cape Town International Convention Centre.

The first cohort of incubatees joined the Makers Landing Food Incubator Lab on 1 January 2021, and graduated in June 2021. 80% of the graduates entered into growth phase, a 12-month entrepreneur-led phase focused on growing their businesses, while still using Makers Landing support and the commercial kitchen.

By the time they graduated, incubatees had:

The second cohort joined the Makers Landing Food Incubator programme in August 2021. As a result of their training, they had already achieved accelerated growth in sales, access to market and production efficiency. Some had even employed staff by the time they graduated, and they all had new corporate identities and focused, streamlined product ranges.

Tarts and sweet pies for events and gifting

Interested candidates can visit the Makers Landing website at www.makerslanding.co.za for more information about the Incubator Food Lab programme.