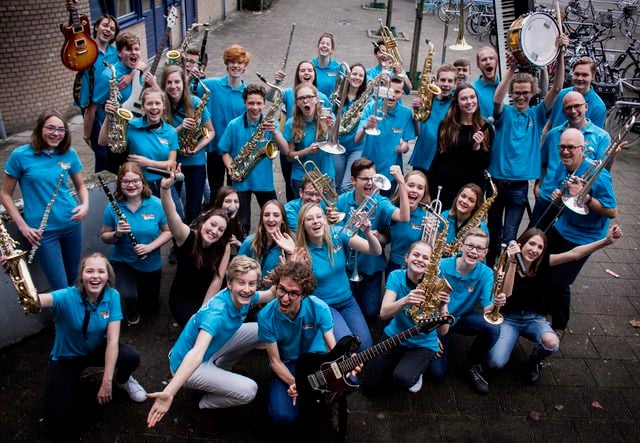 Meander College is, in a way, an ordinary Dutch highschool.

Not “ordinary” is the emphasis the school lays on “cultural activities” and “cultural education”. Music, arts, drama play an important role in the school’s curriculum.

In 1996-1997 the school staged a musical production “CONTRASTS”. Albert Dam, student at the Artez Conservatory in Zwolle and trainee at Meander College, was then responsible for the music component of this production.

He then asked the headmaster of Meander College if he could try and continue the orchestra, which eventually lead to the present MEANDER BIGBAND, an orchestra of some 40 students aged 14-18.

Albert has since then been senior music teacher at Meander College

Meander College now can boast on:

Only recently Meander Bigband celebrated its 20th anniversary with a new CD and a spectacular concert with the renowned trumpetist Eric Vloeimans.

Amongst the highlights of the past 20 years belong the concerttours abroad: Switzerland, Germany, England, Spain, USA (Boston) and China (Shanghai).

Apart from that the band is very active in organizing all sorts of cross-over concerts with pop- and rap-artists, but also with the Youth Symphonic Orchestra De Vuurvogel (= the Firebird).

Moreover the band every year organizes an educational concerttour for local primary schools.

The bigband is the proud owner of its own truck, necessary for the transportation of instruments and other equipment to the various venues.